A day at a property auction… during Brexit negotiations

Property Auctions can be an enchanting affair, especially for those first-timers and bargain hunters. If you’ve ever watched BBC One’s Homes Under The Hammer, you may very reasonably have visualisations of joining a bustling, excited room full of people just like you, hoping to clench a complete bargain - for a potentially massive return on investment.

But with undeniable volatility in financial markets, especially in the UK – post Brexit, (and post Stamp Duty and Tax Regulation changes…) we headed to Auction House London in September 2017, to see exactly what properties were to be clenched under the hammer – and see if there were any trends that could somehow demonstrate any change in attitudes to property investment.

Met by a half-filled room in the early hours, the pre-auction talk is hosted by Godwin Okri, a lawyer specialising in strategic property investment, CEO of Menvo Ltd.

Okri presents property investment as an opportunity waiting to be taken, despite the many obstacles in the way. Any key takeaways?

Okri mentioned the importance of:

· Focusing on and understanding your yield

· Considering whether investing through a ltd. company will actually benefit your individual circumstances.

Okri described this in terms of investing in properties in two different countries as an example, so investments could be adjusted according the the performance of a currency. In his case – the UK and the US. Investopedia describes an inverse exchange-traded fund (ETF) as ‘an ETF constructed by using various derivatives for the purpose of profiting from a decline in the value of an underlying benchmark’.

Paydown is a process described by Investopedia as 'when a mortgage borrower pays the principal and interest of a mortgage. In doing so, the borrower is paying down his debt'. Okri suggests this will then enable the investor to buy further properties.

With constant changes to the property market and regulations, Okri suggests staying ahead by networking and reading as much as possible.

Just like running any other business, Okri recommends to keep a close eye on the properties, interest rates and the tenants.

And to summarise, In reaction to the changes in the BTL market. Okri calmly and convincingly said:
“Wherever there’s a threat, there’s an opportunity” 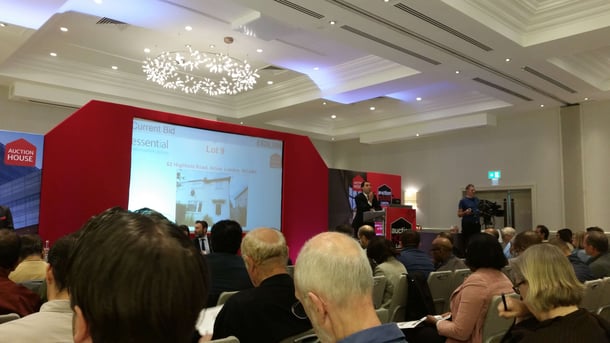 Before the auction we take a quick flick through the catalogue, a couple of things we look forward to are;

The only property that sells at its ‘guide price’.
All three rooms let on one month rolling contracts producing £18,000 per annum.

We haven’t acquired a legal pack but from the looks of it this is a clear investor opportunity, it already has paying tenants and just at the beginning of August, the same property was listed by an Estate agent for a guide price of £400,000. Another three-bedroom flat in the same block is listed for £500,000.

Sold way beyond its guide price

The property is 0.1 miles away, literally a stone’s throw from St James Street (Walthamstow) rail station. It’s arranged as a shared HMO, with management office and staff facilities.

So, the property selling for £514k, or 28% over the guide price may sound high but not when you consider similar properties in the area are on sale for £590k minimum.

The property was listed with 20.8% yield on guide once fully let.

Little interest is an understatement in this case. There were no bids at all, which left the auctioneer literally asking ‘Anyone interested?’ to which he was met with a deafening silence.

…and what happened to the lots we were so looking forward to?

Lot 112 – a £7,500 one bedroom flat in Northumberland with a lease of approximately 72 years unexpired

Unsurprisingly, sold. For £13,000. It was listed with a potential income of £3,855.80 per annum, so at that hammer price, represented a rental yield of nearly 30%! A similar property in the same block of flats, sold for £16,000 in April 2017 – so that’s quite a deal. It’s also way below stamp duty threshold and comes with furnishings -so potentially the investor will just need to extend the lease and rent out.

Definitely brought in the crowd and there was a lot of excitement over it. To be fair it was an 8-bedroom property plus grounds, with an estimated annual rental value of £98,544.

However, the last bid was £1.27m, which just wasn’t enough to meet the reserve and remained unsold.

The sale rate was listed by Auction House as 61% the following day, raising £15.4m. Is that good/bad? If you look at the graph below, £15.4m isn’t terrible, but the sale rate has never been so low, not since records of the Auction starting in 2011. 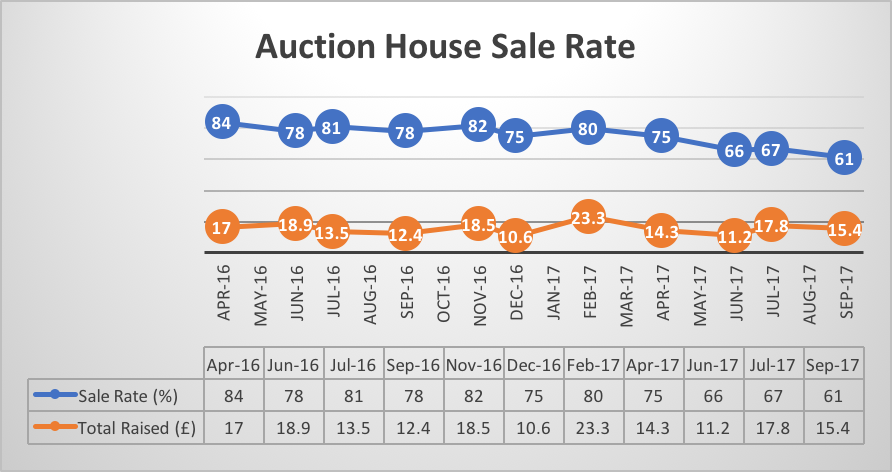 So, despite the Auction hall being filled with interested bidders (at first), there were one too many quiet moments throughout the day. You also couldn’t help but notice how many lots were just not selling, it was almost a surprise when one did.

Can any changes to the industry correlate with these fluctuating sale rates?

What happened around then? Well for starters, a month prior, Brexit Article 50 was officially triggered. A week before, the mortgage interest tax relief changes were put into effect, with gradual cut backs to 20% between 2017 and 2020.

And to answer the question we were seeking, did the behaviour of bidders at Auction House London demonstrate changing attitudes to property investment?

It seems so. The room of bidders, or curious attendees, could somehow be described as ‘on edge’. Apart from a couple of lots which went way beyond their hazy ‘guide prices’, there seemed to be a heightened sensibility, or avoidance of risk.

If we look at recent news, commentators have described the property market as presenting a mixed picture – “polarised” or even “bi-polar”..

“Although we have seen a period of strong growth in the bridging sector, there are still challenges ahead. The Brexit negotiations will likely cast a shadow over the property market for the foreseeable future, and with inflation continuing to be a problem, it is possible that we could see an interest rate increase in the coming months.

Whatever happens next, the industry needs to be ready with diverse and flexible financing options for property purchasers.” (read more)

“The latest results continue to suggest that the greatest pressure on both prices and activity continues to be felt in prime central London market. Although there are some signs that the wider South East is also losing some momentum, anecdotal evidence suggests the impact is very location specific. Meanwhile the numbers for most other parts of the country point to a rather more resilient marketplace.”

What will the property market be like in a few months?

It will be interesting to see the outcomes of the next auction. Auction House London next takes place on the 31st of October 2017 at the Regents park London Marriott Hotel.

If you’re planning on going and placing a bid – for the confidence and security of bidding with your financing already in place prior to the auction, give us a call today or visit our bridging loans page.

For more information on how else you can prepare for property auctions, this blog is for you.

Disclaimer: This blog is solely for information purposes and the views, information, or opinions expressed within should not be taken as advice.

A day at a property auction… adapting to recent changes